Snowbirds rejoice as E-ZPass is now accepted at toll roads in the metro Orlando area.

There’s some great news for the huge number of travelers planning to head to Florida from the Midwest and Northeast states this winter as many toll roads in the Orlando area began accepting E-ZPass as of Sept 1 of this year.  Previously owners of E-ZPass transponders either had to add a second transponder or pay the higher Pay by Plate charge to use the cashless toll lanes operated by the Central Florida Expressway (CFX) when visiting resorts like Walt Disney World and Universal Orlando.  Now they can glide through them without worrying about getting a bill in the mail and only having 30 days to pay.

Some Caveats and Additional Information

Every silver lining has a cloud, and in this case the cloud is that there are still toll roads in the Orlando area that are not operated by CFX and which do not yet accept E-ZPass.  For example, Florida’s Turnpike system operates toll roads around Orlando but does not currently accept E-ZPass, and drivers from Midwest cities like Minneapolis, Chicago and Detroit are likely to encounter toll roads from both systems en route to Disney World. Additional details can be found here and on the CFX website.

There’s an App for That!

Fortunately there’s an app that can help you quickly determine where your E-ZPass transponder will – and won’t – be accepted in Florida.  The Tollsmart app, which is free for download on both Apple’s App Store and Google Play, not only calculates the cost of tolls for your trip but will also inform you where your transponder is accepted. As you can see in the screenshot below, a drive from Chicago, IL to Walt Disney World would likely take you through toll roads operated by both CFX and Florida’s Turnpike and Tollsmart indicates which accepts your E-ZPass (the green pin) and which doesn’t (purple pin). 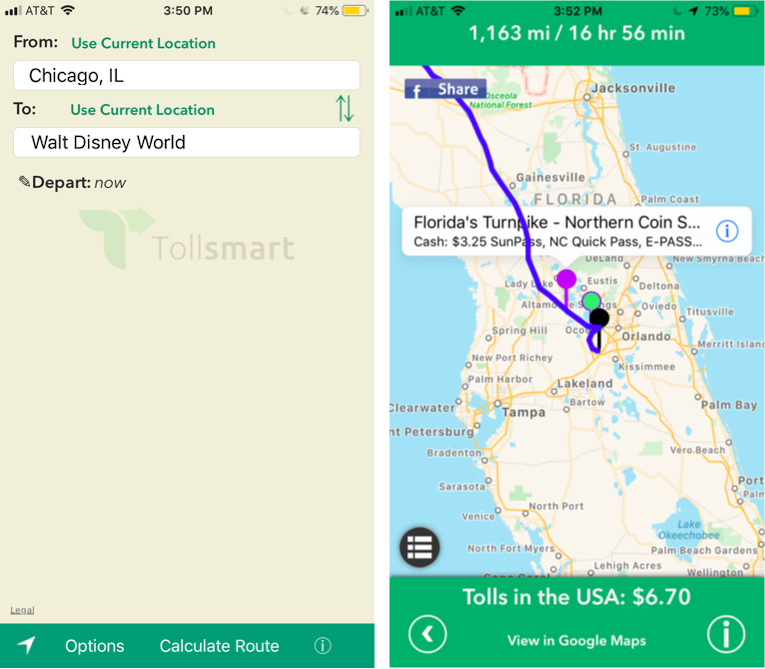 Tollsmart app highlights where your E-ZPass is accepted

This entry was posted in Autos, Tolls, Travel, Uncategorized. Bookmark the permalink.